Articles in this Blog

Water privatization hasn’t been explored much in the general consumer media in the US, although there are articles in the scientific and water industry press.  Water privatization generally refers to private contract operations of water systems owned by public utilities, however a few municipal water systems are moving to private ownership, usually when a corporation can provide economic incentives to a community that can be used for other expenses such as schools, parks, etc. in exchange for managing/partially owning a water system.

A cursory glance at the topic on the internet reveals that water privatization is a fundamental issue for the anti-government fringe by whatever fanciful name is currently in vogue — Tea Party, Tory Party, Whigs, Tipacanoe and Tyler Too?  The No Nothing Party has the right name.

One outstanding example of a private water system is in Auburn, Alabama.  Set up in the early 1980’s before changes to the tax law in 1986 killed private initiative investments, Auburn’s water system has been studied by universities, used as a model of successful privatization of public works.  Indianapolis, Indiana  is another waste water system operated on a contract basis, with private investment.  U.S. municipalities embracing privitization include Syracuse, N.Y. , Georgetown, Kentucky, Coral Gables, Fl. and Santa Margarita, Calif.

Currently,  U.S. municipalities are underfunded for infrastructure (including water systems) maintenance,  investment and repairs so they are encouraging private investment to fill the breach.  Multinationals  — particularly French and British water companies — are aggressively looking for water utilities to manage on a contract basis with a view to partial or full ownership in the future.

It would be useful for people in the U.S. to know who owns their local waste water operations and water supply systems.  There may be public-private arrangements where a local government council sets regulations, but who picks up the profit on your flush? Entrepreneurial operators are making an impact as their contract operations managers save money through economies of scale and engineer water plants to work more efficiently.

E-Books are just right for travel -lightweight, nearly infinite, a library in your hand.

If you plan to buy books, try my web-store, Double00Books!  Use the Search function to find any Amazon title.

Pyrenees Pilgrimage, my recent book about walking across France alone, is also for sale in Kindle format on Amazon.

Prefer a paperback edition?  Pyrenees Pilgrimage on walking across France alone is ready to read, available on Amazon.

Get started in travel writing with Travel Writing: See the World, Sell the Story.  Signed copies available from the author on Half.com

Wish You Were Here article in Writer’s Digest Magazine May/June, 2011 on travel writing tips and tricks.

A few copies of Travel Writing : A Guide to Research, Writing and Selling are available online.

You are welcome to visit and subscribe to my websites and  blogs —   AdventureTravelWriter.org  *   FranceFootsteps

Check out this web chat about travel writing and global networking experiences.

Last week of January, 2012, I hopped on a bus to Congee Beach and walked up the coast line on a really nicely constructed walking path that skirts the coast for 6 KM up to Bondi Beach. The point north of Congee is notable for a metal and concrete memorial to the Australians killed in a bomb attack on a tourist club in Bali.  Reported sightings of the Virgin Mother Mary have brought a home-made memorial nearby. 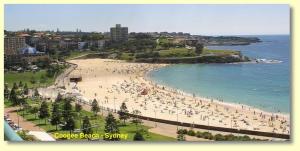 Bondi is famous for surfing and the sun-tanning body culture. The surf-life guarding tradition is active in all the beach front communities.

Strolled through the Bondi Pavilion, built in 1928 and opened in 1929.  Wandered into a large exhibition space and spoke with photographer Hilton Luckey about Australian surfing traditions, the manly-matey culture, and the alt lifestyle back in the day.  Reminded me of Santa Cruz, Big Sur and points south during the mid 1970s when we would sleep in vans or under the stars, and pass the time hiking in the forests or lolling on the beach.  Did the strong gut ”’get-‘er-done” ethos from Australia migrate cross the Pacific?  I don’t know.

The coastal path was well marked and graded with stair and teak railings for elevated areas.  While the sun burned down, the physical part was easy for me and the infrastructure is so highly developed that there are filtered water dispensers and fountains every kilometer or so.

After slurping down a chocolate milkshake from the beach bar at Clovelly (Shark Point on the map) I paused to paint a little watercolor.  My idea of paradise — walk, look, paint. At the end of the day, I watched young surfers, then took another bus back to town.

So what does that mean for ordinary people?  China depends on families to look after the health and welfare of its elderly population. The one-child policy has been effective in stabilizing population growth, but the replacement population is skewed to males.

China may need a gender based immigration policy to continue a stable replacement worker population to continue the growth which can support the rapidly aging population through individual care or a national pension scheme.

China will always have a vast population, so that demographic impacts may not be as deep, but widespread.  The political history has been to shift populations around the territory in order to support continued growth, populate empty areas and stimulate development. However, soon China will have a top heavy aged population — and the stereotype that Chinese are long-lived applies here — with many of those elders without family members to care for them.  Some of those sole offspring did not survive or did not reproduce because of the under-representation of females since the one-child policy took effect. Some emigrated.

China will have to revisit the current policy on pensions and health care. This may provide emerging market opportunities for developed nations to provide China with services such as elder care and health care delivery.

And, look out China, under-educated, unskilled American females may be headed your way to pick up prosperous spouses.

The U.S. was only a notch ahead of India on the amount of public debt as a percentage of GDP in 2008, using data prior to the global economic implosion.

While India and the U.S. will retain their robust populations to continue economic dynamism, by 2050 half of the U.S. population will be middle-aged or older.

India and the U.S. have similar profiles  of public debt in relation to GDP, but working-aged population is projected to diverge.  This will impact U.S. ability to sustain its economic growth pattern in relation to mounting proportion of public debt. If  the U.S. enhances trade partnerships with the more stable and growing economies such as India, the U.S.  economic outcome may improve.

Great-Grandmama may be able to afford a caregiver — a sponsored immigrant from India who speaks excellent English and has nursing training.

Change is now called transformation.  What does that mean to a variety of different audiences?  As government embraces the word “transformation,” it confuses the situation and response, as it tries to differentiate between changing circumstances (incremental change) and transformation (more holistic, larger scale change).

We know, in the future, the concept of unfolding change will be called something else again.

The language of change and transformation matters. Semantics create expectations. Communications with the entire organization need to be clear and direct, avoiding language and in-house jargon that carries baggage and builds resistance or heightens awareness of past hierarchies.

Do you think transformation in government leadership will succeed?

You’re on a Staycation.

This summer — or winter– take the time to explore your own backyard, walk through a local park, or tour the county historical society museum.

No need to book out-of-town on a carbon-hearty expedition.

Your Guide to Jamaica & Beyond

A journal of literature and the arts

An Author of Many Parts

On the Red Road in South Puna, Hawai'i